0
Language: EN
VAT: On
VAT is turned on
Login
Sign Up

Up high, you wear your emotions on your sleeve

Safety and cooperation are key when working at heights of 100 metres.
Ronnie and Jens are rescue from height instructors, and they strongly believe it is better to respect heights than to be fearless of them.

Imagine you’re climbing a vertical ladder, and you have to go up 106 metres. There’s nowhere you can lean against or stop for a quick break. The only thing protecting you is a harness and a couple of carabiners you keep swapping over. You’re climbing up the ladder with rescue equipment to help a colleague who has been injured. He’s starting to panic and the adrenaline is pumping. You know that your training and your ability to calm him down could mean the difference between life and death.

Ronnie Jensen and Jens Larsen are rescue from height instructors. They are trained to quickly scale cranes, masts, wind turbines and drilling rigs – and then to come back down again safely with others in tow. On less dramatic days, they organise courses and train others in how to rescue people at height. It’s a job that – in their words – never gets boring, as you need more than just nerves of steel.

Safety is more exciting than daring

Ronnie and Jens have been partners for eight years. They originally worked for two different companies, but when they were given the opportunity to turn their greatest competitor into a partner, they both jumped at the chance: “Jens is a real charmer, plus he’s very good at what he does,” says Ronnie, setting them both off with their infectious laughs.

There is absolutely no doubt that they are a strong team. They both finish off each other’s sentences, and the air is full of friendly jibes and rivalry. Both of them are lots of fun and, despite their job title, both have their legs firmly planted on solid ground.

Jens is a qualified carpenter, but an issue with his back put him on a new career path in safety and heights. At the beginning, the heights were limited: “I got a job on a ship working in safety at a height of 80 metres. Until then I’d only ever climbed up to a maximum of 50 metres, at which point my legs began to shake. That’s why I hired Ronnie. And he pushed – well, pulled – me even further,” laughs Jens.

“Something just happened that moment. It just became really clear to me that respecting heights was more important than being fearless – I wanted to return home safe and sound to my wife and children at the end of every working day. It was like fire had started in my belly, and that was when I became Mr Safety.”

Ronnie says he fell in love with working at height before he even discovered the world of safety. After constructing wind turbines, he had the chance to carry out maintenance on them at a height of 40-50 metres. “I could just feel it in my gut that that was what I was supposed to be doing. I felt young and invincible – everything was so exciting. I was never afraid.”

Ronnie became interested in fall protection when he witnessed two colleagues having an accident. “Something just happened that moment. It just became really clear to me that respecting heights was more important than being fearless – I wanted to return home safe and sound to my wife and children at the end of every working day. It was like fire had started in my belly, and that was when I became Mr Safety.”

Shortly afterwards, Ronnie started working as a consultant at a company producing fall protection equipment, eventually becoming qualified as an instructor. Both Ronnie and Jens agree that it isn’t just the working at height that they love about the job, but it is also very much because they get to work with other people.

“You need to understand people,” explains Ronnie. “It’s incredibly important in stressful situations that you can talk to anyone and everyone. And not just when people are dangling there after having a fall. A lot of the people we are teaching are also scared. They have to deal with being up high and getting to know unfamiliar equipment at the same time.”

“There are two different ways of approaching heights,” adds Jens: “Looking from below, things don’t seem that bad. But when you’re up and looking down, you see heights in a totally different way. It’s all a question of psychology when you’re trying to get people to focus on the equipment and the task they’re doing, so that they forget where they are. You need to talk quietly and calmly and have a smile on your face – sometimes a little bit of humour helps, too – and that makes things much easier. Nerves are infectious.”

Seeing Ronnie and Jens’s happy faces and feeling their calmness also helps – you can just tell they’re good at what they do.

Other people’s enthusiasm is uplifting

When working in the emergency rescue services, you not only see the ground from a different angle, but you also see a different side to people. As Ronnie says, the ‘masks’ that people wear fall as soon as they get up in the air, and that’s when they show who they really are. “It’s impossible to hide being scared and hating it up there. At the same time, though, it’s also impossible to hide it if you’re having a fantastic time. People that are enjoying themselves just have this great look on their faces as they come up – they’re smiling from ear to ear. And that makes you feel great too.” Ronnie is beaming, and Jens nods as he speaks: there’s no doubt they both mean it.

It’s clear that any workwear is really put to the test when it is used to climb in. As well as being super flexible so that you can move around freely, it also needs to regulate the temperature. Jens explains: “Imagine how warm you get climbing up to a height of 100 metres. And then think how cold the wind is once you get there. If you’re going to be up there for an hour, you need something that is going to take any moisture away but also stop the wind or rain from getting in. The pockets also need to be in exactly the right place: You need to be able to get your stuff even if you’re in a harness and holding on – it has to be easy to take things out of your pockets or put them back.”

“Imagine how warm you get climbing up to a height of 100 metres. And then think how cold the wind is once you get there. If you’re going to be up there for an hour, you need something that is going to take any moisture away but also stop the wind or rain from getting in.”

Kansas has an eye for detail

For Ronnie, it’s all about the details: “One of the things that I thought about a lot is the large hood the coats have. It actually fits over a safety helmet, and that’s really useful here during the winter months. I’m also really happy about the ankle cuffs on the trousers that mean I can tighten them around my boots and cut out all the wind, and the fact they have a really high waist is fantastic. That way they don’t fall down exposing your middle when it’s blowy and rainy.” 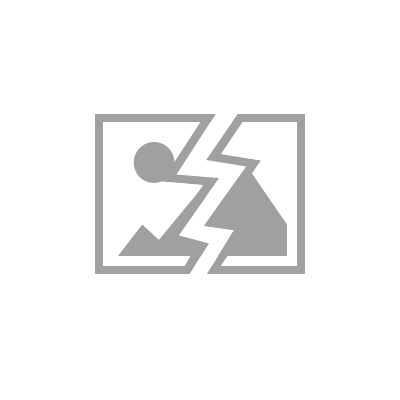 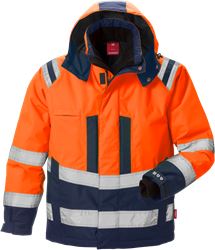 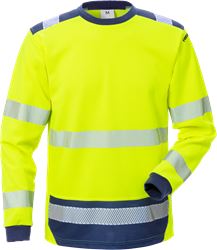